After many months of planning, Wordless Music is deliriously proud to announce details of Warp20 NYC, the second and only U.S. installment in a series of worldwide events taking place this year in Paris, Tokyo, London, and Sheffield.

Warp20 NYC will be a four-day celebration of the music, films, and 20th anniversary of the the peerless UK label Warp Records, without which there would surely have never been a Wordless Music series.

The other confirmed fest show will be a free concert at the World Financial Center Winter Garden with Flying Lotus, Chris Clark and Hudson Mohawke on September 5th.

The "kick off" for Warp20 NYC (two months before the fest...) will be tonight's (7/22) Alarm Will Sound show at (Le) Poisson Rouge. The program for the night commemorates the five-year anniversary of the group's 2005 album Acoustica with chamber orchestra arrangements of music by Aphex Twin, Autechre, Mochipet, John Dowland, and The Beatles. Nic Offer from the band !!! will DJ the late show. Tickets for both the late and early shows are still on sale.

In addition to the above-mentioned acts, Warp is also home to Grizzly Bear, who will be playing a free Pool Party show on August 30th.

The full program for tonight's LPR show, with more info on Warp20 NYC, below... 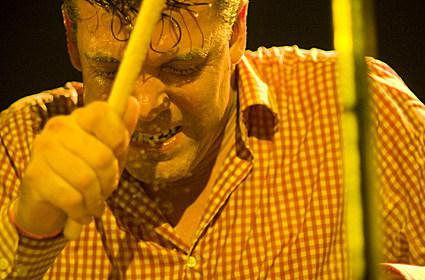 Since its birth as a shop and record label in Sheffield in 1989, Warp has become one of the world's most respected creative organizations. Quickly developing into a platform for innovative and boundary-breaking music talent, Warp became synonymous with such artists as LFO, Autechre, Aphex Twin, Boards of Canada, and most recently Grizzly Bear, Battles, Flying Lotus, and Chris Clark. Running parallel to the music is an equally strong visual identity, famously established through partnerships with graphic design iconoclasts The Designer's Republic and video auteur Chris Cunningham, placing Warp alongside legendary labels such as Factory in British cultural history.

Warp took a logical but ambitious step in 2001 with the launch of Warp Films, winning a BAFTA for its very first production, Brass Eye satirist Chris Morris' film debut My Wrongs... Since then high-profile features have come courtesy of Shane Meadows, whose masterpieces Dead Man's Shoes and This is England have enjoyed widespread success, the latter winning Best British Film at the 2008 BAFTAs. 2009 sees development on more features with directors Chris Morris, Richard Ayoade (IT Crowd) and Paul King (Mighty Boosh).

In 2004, Warp pioneered the sale of unrestricted mp3s via the launch of award-winning download store Bleep.com. Hosting nearly 500 other independent labels, Bleep has sold over 2 million tracks to date.

Over 20 years, Warp has developed into a multifaceted creative company, able to forge a unique path through a rapidly changing and unpredictable landscape. In 2009, Warp will celebrate by bringing together its roster of artists, directors, and associates for a series of multi-platform events, new music, and film releases.

Warp20 events will merge music, film, and art in distinctive locations and venues, and kicked off with a huge weekend in Paris on May 8-9 at the Cité de la Musique and MK2 Cinema, featuring Aphex Twin & Hecker, Chris Cunningham, !!!, Clark, Flying Lotus, Seefeel, and many more. Warp20 will continue throughout 2009 with events in Sheffield, Tokyo and London.

About Warp Films at The New Museum