Warpaint at Prospect Park in June (more by Amanda Hatfield) 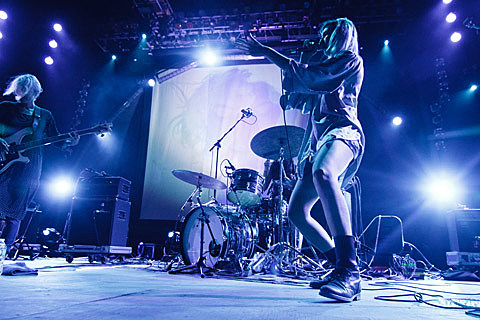 Earlier this week SBTRKT dropped the Raury collaboration "Higher" from his new album Wonder Where We Land (due 9/23 via Young Turks), and now he's put out "Voices In My Head," which features rapper A$AP Ferg and indie band Warpaint (drums from Stella Mozgawa, vocals from Emily Kokal). So far none of these singles have sounded very much alike, so it'll be interesting to see how this whole thing comes together. Listen to the new one below.

Warpaint also have a previously discussed tour coming up, which brings them back to NYC on October 14 at Webster Hall. Since we last spoke, it's been announced that that show and a few others will be opened by New Zealand's Liam Finn (who played a handful of his own NYC shows over the summer). Tickets for the NYC show are still available.

All Liam Finn dates are listed, with the new SBTRKT song, below...