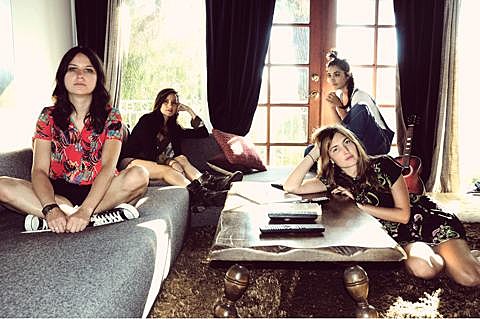 As mentioned, Warpaint's long-awaited second album is out next week via Rough Trade. If you liked the sultry, decadent delights of The Fool, you will no doubt dig the new one too. Operative word here is sexy, at least according to vocalist Theresa Wayman who told the Guardian, "We leaned towards things we thought were sexier. It was an actual adjective we would use, like, 'Oh, that's sexy' or 'I think it would be sexier if we did this...' That actually happened quite a bit." She continues on the same idea:

I don't know if this is TMI or something, but if you really fall into music while you're playing, it's the same space as when you are with a lover. You can see guitar players in the way that they're playing that they're in some ecstatic moment and it could equally be a sexual moment where they're alone with someone. So if I were to actually put it all into a pot and think about it, playing music can take you closer to that same kind of state of ecstasy as an orgasm. Sometimes that can be very alarming if you're onstage.

You can decide for yourself whether you think Warpaint's new album is sexy or not. It's streaming in full via NPR and The Guardian and you can listen in this post.

Warpaint's tour hits NYC at Webster Hall on March 21 and tickets are still available. Stream the album below...