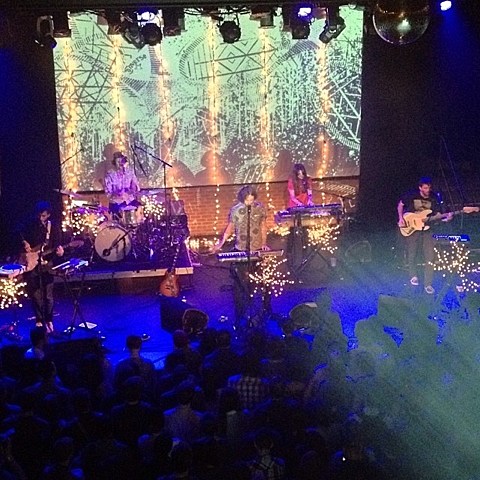 Washed Out is currently on a tour which brought Ernest Greene & co. back to NYC for a Converse Rubber Tracks Live show at Music Hall of Williamsburg earlier this week (11/18), a much more intimate appearance than his last Terminal 5 show. His next NYC appearance will be when he DJs the J Roddy Walston show at Gramercy Theatre (12/14) (tickets). All upcoming Washed Out dates are listed below.

Speaking of Converse Rubber Tracks, they're launching a new project at the Brooklyn recording studio, CONS Project: BKN, which offers creative workshops for kids. Their "goal is push creativity forward by inspiring kids with creative ambition to unleash their creative spirit through engaging and edifying events." The workshops happen during three weekends, Nov. 23 & 24, Dec. 8 & 9, and Jan. 11 & 12. Select artists will be there, including El-P, Ryan Hemsworth, and more. Plus, El-P will headline an exclusive concert on January 24, following the workshops' final weekend. Registration is open now. More details below.

And speaking of Converse, they just made a behind-the-scenes video on the Ratking/Black Dice collaboration, which you can watch below...

November 23rd and 24th - Audiovisual: How to make music videos, silkscreening and more
December 8th and 9th - Music Creation: How to make beats, remix songs and more
January 11th and 12th - Music Recording: How to record in a studio and more