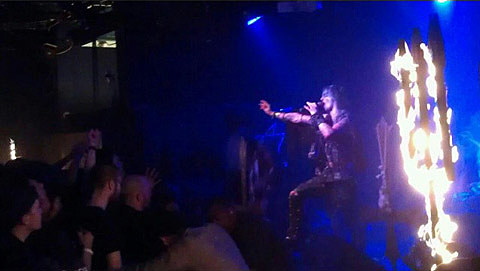 The Swedish black metal band Watain -- they of the bloody, fiery stage show -- played Brooklyn Night Bazaar on Sunday night (6/15) as part of the Northside Festival and the Blackened Music Series with Kosmodemonic and T.O.M.B. The show, the band's only one in North America this summer, was advertised as being the first time Watain has ever brought their full Euro-style festival stage show to the US. While there were Watain's burning tridents on either side of the stage, it wasn't quite on the Euro level, which, perhaps should have been expected -- how could you shoot fireballs into the air in an indoor venue, let alone a Brooklyn flea market? Those burning Ws did, howeve, make the showroom feel like a boiler room.

As anyone who has been to a Watain show knows, the band is comprised of showmen -- it's a total spectacle to catch Watain live, full of the gore and ritualistic elements that aim to turn five guys playing black metal into five guys who live black metal. Danielsson and his guitar wielding compatriots grimaced and stomped around, delivering faithful and enthusiastic renditions of their songs. The volume could have been turned up -- from the middle of the hall, it wasn't that loud.

Unless you're a particularly rabid fan, the back of the crowd is where you want to be. About halfway through the set, like he's done before, Danielsson doused the audience in pigs blood, thrown from a little horned skull statue/vessel. It was, at first, a moment of confusion with some commotion up front, and then a god awful, putrid, rancid and grossly bodily smell (we warned you). As someone put it, "It smells like every toilet in here backed up at once." About 100 yards away around a curtain that blocked off the vendors stands, Bareburger was selling burgers.

TMZ somehow caught wind (ha) of the act and put video of the blood tossing on its site along with pictures of some blood soaked fans. Their descriptions are gold:

A Swedish black metal band sprayed pigs blood on concertgoers during a Satanic ritual ... triggering a vomit-fest in the audience ... and we got the DISGUSTING footage...

You hear audience members shriek ... and we're told some barfed and cried.

I didn't see anyone barfing and crying in the aftermath, let alone a full on vomit-fest, but if that did happen, it brings to mind the time that Chunk went up to the balcony and barfed on moviegoers, triggering a full on upchuck armageddon (Goonies reference). It was the worst thing Chunk ever did.

To wrap up -- pretty disgusting show, more of an experience than anything else (the box has been checked), could have been louder. I suggest seeing Watain in an outdoor venue.

Invisible Oranges recently spoke with frontman Erik Danielsson about the infamous stage show (and his thoughts on black metal), so head over there to read about it.

Check out the setlist and watch TMZ's video as well as of some of Watain's BKNB set, courtesy of (((unartig))), below...