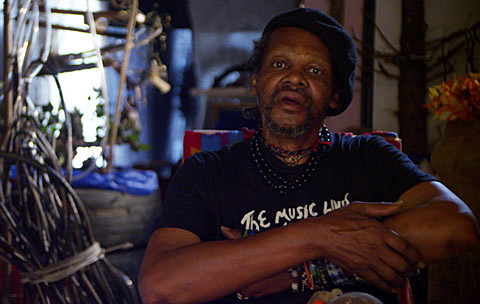 Outsider artist and improvisational musician Lonnie Holley, just played London's Meltdown Fest on Monday (8/24) which was a collaborative performance with Hot Chip's Alexis Taylor. (This year's Meltdown, which also featured Young Marble Giants, was curated by David Byrne.) You may remember that Lonnie was part of the Arthur Russell tribute shows at BAM earlier this year and he'll be back in NYC this fall, performing at Artists Space Books & Talks on October 6. The show is presented by Issue Project Room and tickets are on sale now.

In other news, a major showcase of Holley's work, titled "Something to Take My Place" just opened at South Carolina's Halsey Institute of Contemporary Art at the College of Charleston School of the Arts. It's his first solo exhibit in over 20 years and features a residency, exhibition, video, concert, and monographic catalogue. It runs though October 10. The Halsey Institue commissioned a 20-minute documentary on Holley, also titled "Something to Take My Place," and you can watch that in full below.