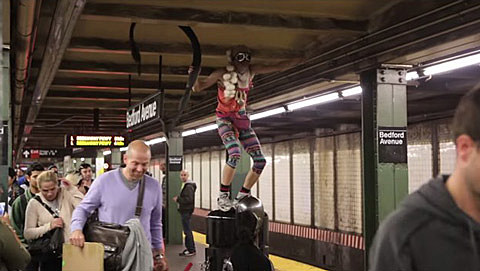 Perhaps you've seen him at the Bedford L stop, dragging a baby doll attached to a marionette control rod along the platform or shaking something that looks a whole lot like the remnants of a dead animal in the face of an unsuspecting straphanger. His name is Kalan Sherrard, and, as Gothamist's short documentary about him confirms, that that thing probably is, indeed, a dead animal.

Of all the bizarre things you can stumble across in New York's subways, Kalan's performance art is up there in terms of weirdness. It's also pretty fascinating -- I've only ever seen him at the Bedford L, and his act is a creepy, sexualized and nonsensical affair that Kalan describes as a "non-narative, nihilist, anarchist puppet show about literary theory." His performance relies heavily on found items and he makes things out of garbage and dead animals, and there's often contact between Kalan and the crowd that inevitably assembles around him. In the video, a woman pours a drink into his mouth and he makes mention of people making out with him.

The short doc is part of Gothamist's No Your City series and shows Kalan drinking from discarded cups in trashcans and performing his act down in the Bedford station. (Gotta commend him on what looked like a super smooth MetroCard swipe.) If you ever run into Kalan, enjoy the show, but the video provides a valuable piece of information -- Kalan basically hates photography and says he'll harass people who take a snapshot and then walk away.

Gothamist's short video isn't the first time Kalan's gotten press -- he's been on the cover of New York Magazine in the past, has been featured in the Village Voice, and he appeared in coverage of Occupy Wall Street both on The Colbert Report and in Bloomberg. He was also arrested on April 6 in Times Square and charged with disorderly conduct for creating a hazardous condition -- The New York Daily News has an account and video. The News put the arrest in the context of new Police Commissioner Bill Bratton's crackdown on subway performers -- at the time of his arrest, transit police had arrested 416 people for panhandling or peddling so far this year, compared with 154 during the same time period the year before.

Watch the Gothamist video and an older Village Voice video about Kalan below...