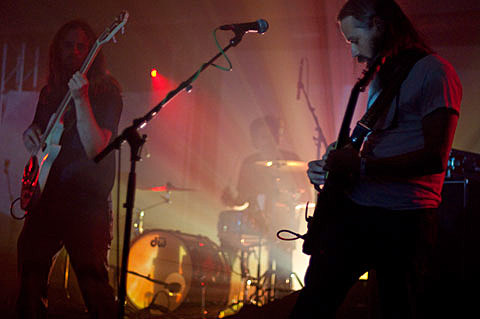 Warning! The following Wooden Shjips video is not for the faint of heart, nor is it for those who don't enjoy the spacey, psychedelics of Black Dice who is responsible for the visuals in this far-out mescaline-induced trip. "Lazy Bones" is a slice of retro-grade 70s hard rock, the focus of the band's recent LP West whose repress is currently up for preorder via Thrill Jockey. Head to the Thrill Jockey site for more snippets from West and head below for the fractals and noise of the "Lazy Bones" video, which makes its debut here.

As previously mentioned, Wooden Shjips hits Music Hall of Williamsburg on November 10th as part of a string of dates with Birds of Avalon. Tickets for MHoW are still available.

Wooden Shjips will spend their New Year's Eve in Austin (at the new Emo's East) with The Black Angels who play THREE NYC shows at Music Hall of Williamsburg in late October (Hallloween included). Tickets for all three dates (10/29, 10/30, 10/31) are still available.