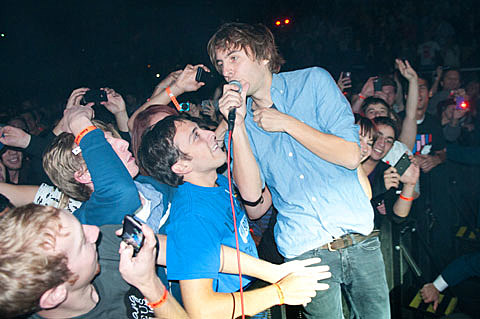 "How a small group specialist woodworkers from Versailles, heir to the French touch to the end of the 1990s - and which the singer Thomas March is married to the trendy Sofia Coppola -, he managed to conquer America? How is it imposed before stars such as David Byrne, Brian Eno or Depeche Mode During the Grammy Awards, winning the Award for best album alternative rock? With Wolfgang Amadeus Phoenix, album sold more than 2 million copies, the group constitutes a true musical phenomenon."

Forgive the poorly worded synopsis for Wolfgang Amadeus Phoenix - From A Mess To The Masses (thanks Google Translator), a documentary on Phoenix which is viewable in full below. Be warned though, portions of the documentary are entirely in French. Phoenix recently recorded material for their new LP, though no word on a release date thus far.

Speaking of France (first Justice and now Phoenix) (not to mention that Daft Punk cameo in the Comic Con pics), the country will be repping hard with its more up and coming bands during CMJ in NYC this week:

Both shows are free with RSVP.

Check out Wolfgang Amadeus Phoenix - From A Mess To The Masses below.

--
--
Wolfgang Amadeus Phoenix - From A Mess To The Masses