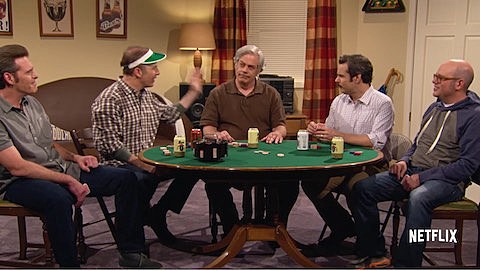 We're just a couple weeks away from Netflix dropping Bob Odenkirk and David Cross' new With Bob & David sketch series (November 13 to be specific) which is, in everything but actual name, new Mr. Show. To get you excited they've shared one of the sketches, titled "Resolutions," which has Bob, David, and fellow Mr. Show alums John Ennis, Paul F Tompkins, and Jay Johnston playing cards and talking about finally sticking to New Year's resolutions, for real this time. You can watch it below.