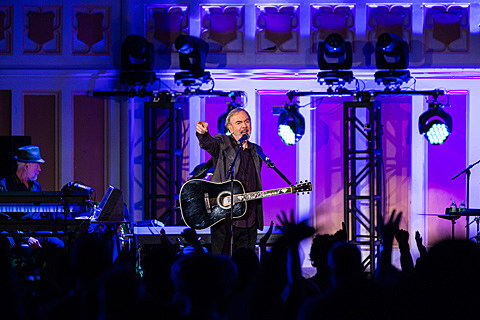 We mentioned that Neil Diamond's Erasmus Hall High School show on Monday (9/29) was filmed and some of that footage has now appeared in a short, three-minute EPK for the new album and 2015 tour. You can see him perform new single "Something Blue," plus they talk to a few of the Neil superfans in line and a quick glimpse of superfan Geraldo Rivera. Hopefully more of that footage will surface, but in the meantime watch this below.

Neil will be back where he belongs -- an arena -- when his tour hits Brooklyn's Barclays Center on March 26. Tickets for that show go on sale October 13 at 10 AM with a few presales starting October 6.