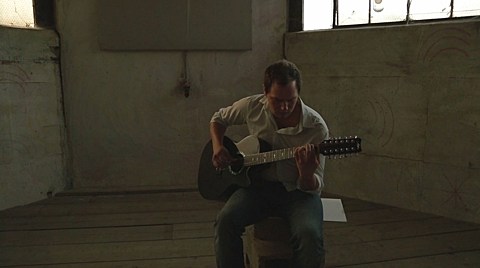 We last wrote about guitar wiz Alexander Turnquist when he released his Flying Fantasy LP in 2014 on Western Vinyl. Here's what we said about it then:

Like his other works, Flying Fantasy combines the busy picking of American primitive guitar pioneered by John Fahey, the modern classical minimalism of Steve Reich, and the ruminative, reflective qualities of a new-age composer such as Lubomyr Melnyk. Yet, for all of these influences, Flying Fantasy sounds like Alexander Turnquist more than ever. He's come out the other side of unfortunate circumstances with a fresh respect for sound. In fact, it's the sound of someone not taking anything for granted. Turnquist infuses every tone with himself, knowing there might be a time when there isn't anything left to give.

More recently, Alexander headed to Buffalo to film a 19-minute Silo Sessions video, in which you can see him alone at work with his weapon of choice in a grain silo. That video premieres in this post and can be watched below.

Alexander was in NYC over the weekend to play Ace Hotel on Sunday (1/25) with Zachary Cale. Anyone catch that?