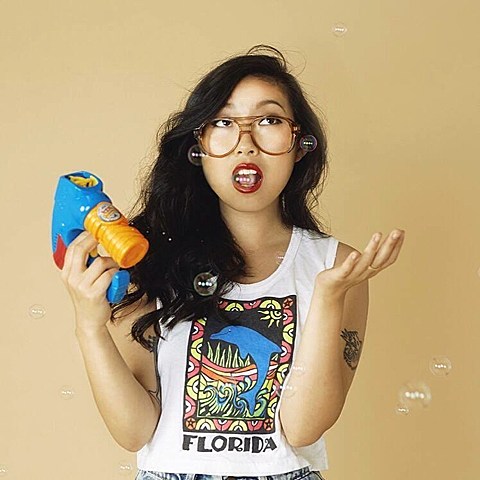 Tonight (8/22) at Palisades, the new-ish Bushwick venue hosts a lineup of a few New York City rappers with a sense of humor. There's Kitty who you already know, plus Buckwheat Groats, Awkwafina, and Swag Toof, along with electronic musician Maxo. Tickets are on sale.

Buckwheat Groats recently put out a video for their single "Tom Hanks," a first-person braggadocio trap rap song from the famous actor's point of view. The awesomely photoshopped video can be watched below.

Awkafina's got a couple videos of her own worth watching, including "NYC Bitche$," which includes the choice lyric, "New York City bitch, that's where I come from, not where I moved to on mom and dad's trust fund." That one came out last year, but it'd make a great response to this year's Brooklyn Girls video. Another, "My Vag," is a more intentional response (obviously to that "My Dick" song) and includes more choice lyrics: "Awkwafina's a genius, and her vagina is 50 times better than a penis."

Awkwafina has other upcoming NYC shows too, including two more this weekend. She plays an 8 PM set on Saturday (8/23) at The Bushwick Hotel's Tiki Time Bomb Party ((71 Ingraham St) and then at midnight she DJs the '90s dance party at The Manhattan Inn in Greenpoint. On August 27, it's Awkwafina Night at Fat Buddha (212 Avenue A) with Bebe Panthere, Rekstizzy, DJ Furen and PaulTrizz; and on August 30 she plays the Kollaboration New York show at NYU's Skirballl Center.