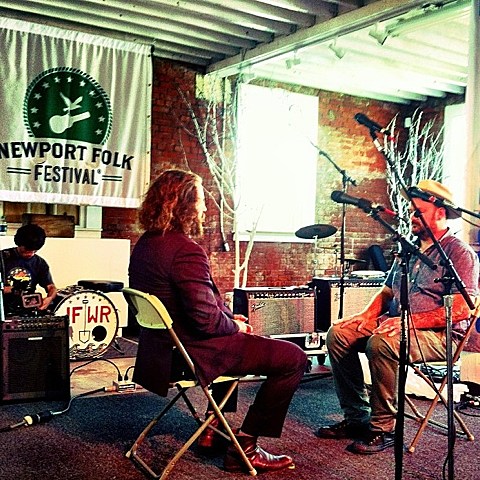 The Newport Folk Festival went down in Rhode Island over the weekend with sets from Beck, Father John Misty (who also played Terminal 5), Bonnie 'Prince' Billy (who plays NYC tonight), Phosphorescent, Feist, Cold Specks, and more. Like we guessed they would, Black Prairie (aka most of the Decemberists except Colin Meloy) joined Colin during his solo set, turning part of the show into a full Decemberists gig. Check out an instagram video of Colin and Black Prairie playing "Down by the Water" at Newport Folk Fest, along with longer videos from each of their respective sets, below.

In other Newport Folk Fest news, Decemberists/Black Prairie member Chris Funk involved himself in a 25 minute staring contest with My Morning Jacket's Jim James, as you can see above. Chris Funk and Annalisa Tornfelt also sat in with Beck (who played an intimate show at Le Poisson Rouge before Newport).

Videos and more tour dates below..

Colin Meloy + Black Prairie (aka The Decemberists) - "Down by the Water"