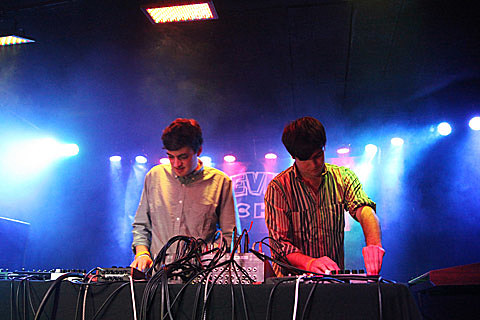 NYC dance duo Blondes returned with a new album Swisher over the summer, taking the opposite marketing approach of groups like Arcade Fire and Boards of Canada, by streaming it in full the day it was announced. They just now made a video for one its tracks, "Andrew," which you can watch, along with the LP stream, below.

Blondes will play a Bunker party in their hometown at Output on Friday (11/15) with Rrose, Tin Man, Kondaktor, and The Bunker's Bryan Kasenic. And in Output's Panther Room, there will be sets by Hercules & Love Affair's Kim Ann Foxman, The Bunker's Mike Servito, and Wrecked (Ryan Smith and Ron Like Hell). Tickets for the show, which you get you into both rooms, are available here and here. It's Blondes' only scheduled date at the moment.

Video and LP stream below...