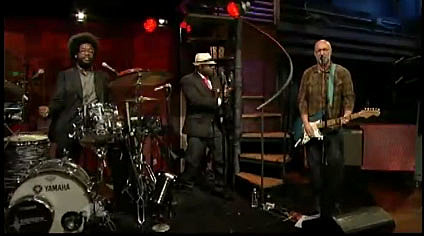 Thurston Moore and his band played "Circulation" off his recently released Demolished Thoughts on Fallon last night (6/22) and "Blood Never Lies" as a web exclusive. Questlove tweeted "damn...Thurston is channeling Sun Ra." Bob Mould of Husker Du/Sugar also performed on Fallon last night. With help from The Roots, he took on the Sugar song "If I Can't Change Your Mind."

Also last night in late night television (that you can watch below), Colbert's musical week continued with Jack White and Talib Kweli. It was Jack's 2nd appearance (first night's video HERE). His third is tonight (6/23) when his Third Man-signed The Black Belles will also play the show.

Talib Kweli - "Get By" on Colbert Web Exclusive

The Black Belles - What Can I Do?