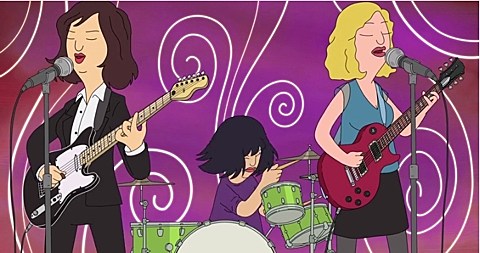 Sleater-Kinney returned this year after a 10-year absence with their killer new record, No Cities To Love, and they've now made a video for one of its tracks, "A New Wave." The band worked with the folks at Bob's Burger's (who have great taste in indie rock), having Corin, Janet and Carrie materialize in Tina's room, with Gene and Louise joining in the dance party. Watch below.

Sleater-Kinney's reunion tour began in Washington earlier this month, and we just caught them in Chicago earlier this week. Check out pics here. The tour hits NYC on February 26 and 27 at Terminal 5 (both sold out).

'Bob's Burgers Live' is also going on tour and hitting NYC on March 27 at Beacon Theatre. Tickets for that show are still available. Eugene Mirman, who voices Gene, will appear with Fred Armisen and other comedians at a benefit at Littlefield next month, too.