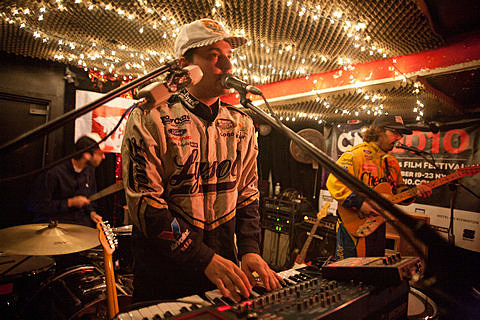 "The goal of the Green-Screening Project is to bring musicians together to change the way music videos are made - more creative and rewarding for artists, and more engaging material to entertain fans. This whole process has been collaborative, from raising money via a KickStarter appeal, to musicians playing together in the studio, to even crowd-sourcing ideas for the videos.

Twenty-eight (!) exciting acts came in the space of one week to master a live track at Seaside Lounge studios in Park Slope, Brooklyn. The recording studio was rented out especially at the end of October 2010 in parallel to the CMJ Music Marathon event, in order to reach a wider geographic of bands. Each band performed in a space decked-out in full professional 'green screen' backdrops so that bespoke visuals could be added in afterwards to create over thirty amazing music videos. It's an audio-visual experiment that was a wonderful, improvised experience, and we couldn't have anticipated how much fun it would be. From redundancies to stormy romances, the tall tales and magic of Green Screening will live on."

The Green-Screening Project is, as of today, now live! And to kick things off, we've partnered with them to premiere their first video from their first of 28 bands, the ever buzzy Dale Earnhardt Jr. Jr. who also played a BrooklynVegan event during CMJ. The song Dale played in front of the green screen is "Simple Girl", from their Horse Power EP, and you can watch the video below (the song is also downloadable above).

And if you missed them at CMJ, or want to see them again, Dale Earnhardt Jr. Jr. are returning to NYC this Friday (12/17) to support Bear Hands at Bowery Ballroom. Tickets are still available for the show which is one of three on the east coast this week for Dale, and one of two shows left for Bear Hands who were just on a longer tour.

Bear Hands also recently dropped a video of their own for "Crime Pays" from Burning Bush Supper Club which is also viewable below (and downloadable above), with all dates and the other video...