Danzig's first time in Skull Face since 1980 (via Facebook) 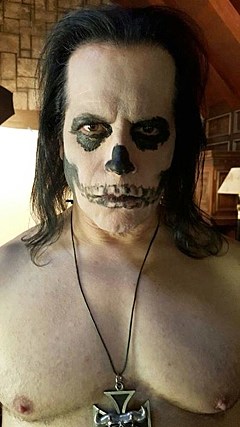 Glenn Danzig is releasing a covers album this year called Skeletons (including Black Sabbath, The Everly Brothers and more), and he recently gave a video interview to Rolling Stone in support of that. In the video, he talks about his early days getting into punk and playing in the Misfits. Danzig discusses legendary NYC punk venues CBGB and Max's Kansas City, where the band started out playing (they played the latter more than the former). He also talks briefly meeting Lou Reed, and more. Check out the video below.

Meanwhile, Danzig kicks off his west coast tour with Pennywise and Cancer Bats this week. It begins in Pomona, CA on Saturday (7/11) and wraps up in Las Vegas at the end of the month. All dates are listed below.

That's not to be confused with the "Misfits" tour, where Jerry Only and other people are playing a bunch of albums Danzig wrote in full.