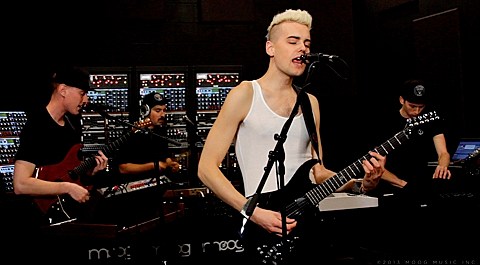 The Moog Sound Lab is a video series where bands and artists are invited to perform in the Moog Music factory in Asheville, North Carolina. With an arsenal of Moog equipment at their disposal, the musicians offer radically new takes on their material.

The first in the series, which has been premiering here at BrooklynVegan, was Toro y Moi, followed by Washed Out, then Zola Jesus, and here's Diamond Rings doing a new rendition of "Runaway Love" from his 2012 album, Free Dimensional. The guitars on the the Moog Sound Lab version are a bit less post-punky than the original, and the song's further embellished by the plucking sound of the Little Phatty and the three Minimoog Voyager Rack Mounts triggered by a Trap Kat for the drums. Watch the video, along with more details on the equipment used and a couple other pictures from the session, below...

Diamond Rings, aka John O'Regan, may have been a long way from Toronto when he stepped into the Moog Sound Lab, but he quickly made himself right at home reshaping Runaway Love of off 2012's Free Dimensional.

This 100% Moog version keeps the energy and pep of the original, but adds an extra dimension of analog goodness. O'Regan takes center stage with his signature pop persona caring the song's lead on a Moog Guitar played through an M-F104M Analog Delay.

Karl Skene played Little Phatty like a human arpeggiator with an electronic plucking sound and used a Minimoog Voyager for ambient modulated sounds. He also used Ableton Live to play the bass line of the Voyager sitting in front of guitarist Graham Van Pelt, who also played Moog Guitar through an MF-102 Ring Modulator, using an EP-2 Expression Pedal to control the frequency of the tremolo on the Ring Mod.

Greg Santilly laid down the drums, which was a Trap Kat triggering 3 Minimoog Voyager Rack Mounts for a hi-hat, snare, and kick.

Diamond Rings reworks Runaway Love into something completely new while keeping the heart and soul of the original song. - Moog 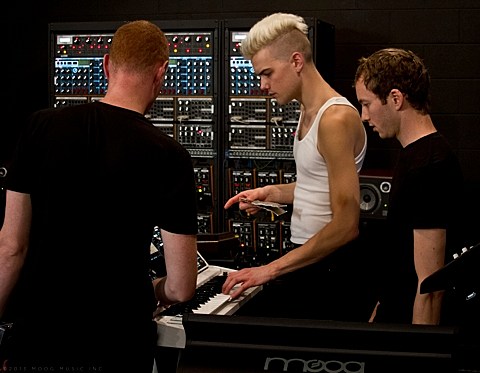 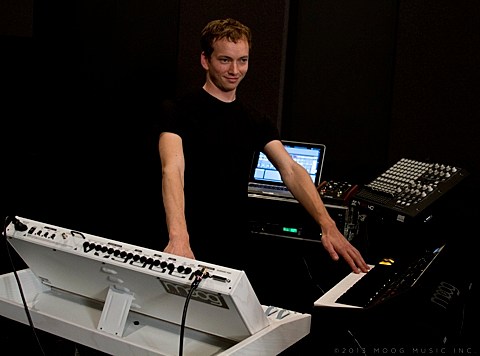