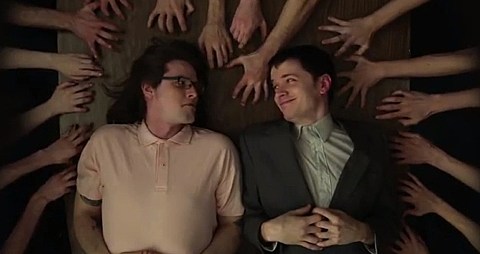 Baltimore floor tom/bass guitar duo Ed Schrader's Music Beat released the impressive Jazz Mind LP last year, and as mentioned, this year they contributed a track to the excellent Sub Pop 1000 compilation. Their track is the post-punk ripper "Radio Eyes," which shifts back and forth between razor-sharp bass lines and shouted vocals to softly-sung melancholic passages. The duo made a video for the track, which you can watch below, and you can also download a free MP3 of the song above (via Gimme Tinnitus).

Ed Schrader's Music Beat seem to love coming to Brooklyn to play Death by Audio, and you'll have two chances to see them do that this month. First, they play the Brooklyn venue this Tuesday (5/14) with Hemlock Ernst (aka Sam Herring of Future Islands, who Ed Schrader released a split with), Human Pippi Armstrong, and Adventure. Then, ESMB will return to DBA on May 25 for a show with Guerilla Toss, Skimask, and Bugs & Rats. Admission for both shows is $7 at the door. Those are the only two shows for the band that we're currently aware of.