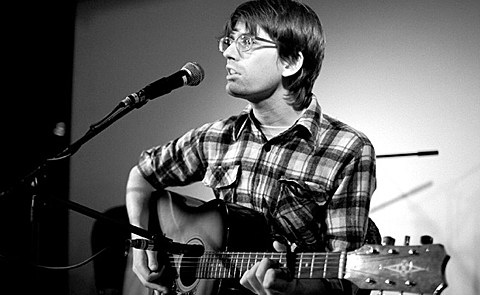 Lo-fi folk lifer Elephant Micah (aka Joseph O'Connell) released his newest album Where In Our Woods earlier this year on Western Vinyl, and today we're premiering the video for an alternate version of its song "Demise of the Bible Birds." The song features contributions from Bonnie 'Prince' Billy (aka Will Oldham) and Jason Evans Groth of Magnolia Electric Co. The video is titled "Hydrilla" and was made with filmmaker Todd Chandler (who's also a member of Dark Dark Dark). To quote the video description:

Hydrilla incorporates Chandler's footage of the spring with O'Connell's original music, and is interspersed with excerpts of narration from a local tour guide. Over the course of the piece, the naturalist comments on historical ties between local arboreal life and the industrial production of dynamite, the perseverance of a tree decimated by lightning, and, finally, the virtues of the Florida Manatee.

Elephant Micah also has three live shows coming up this month, two of which are in Brooklyn. He performs a live score for the Criminal podcast at The Bell House on 7/15 which is sold out, and also plays an Elephant Micah set at Living Room on 7/16 with Zachary Cale, Last Good Tooth and Wes Buckley. Tickets at the door for that one (and remember, The Living Room is in Williamsburg now). The next day he plays Baltimore. All dates are listed below.