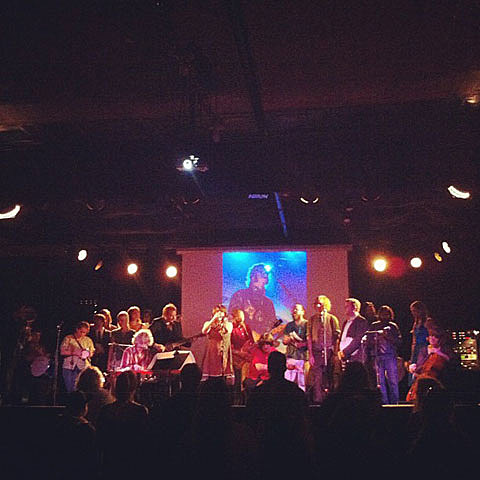 A memorial service for Olivia Tremor Control's Bill Doss, who passed away on July 30, went down at the 40 Watt in Athens on August 4th. Friends and family, like Jeff Mangum, Julian Koster, Robert Schneider, Bryan Poole, Jason NeSmith, Derek Almstead, and Eric Harris, gathered to tell stories and perform songs in tribute to their Elephant 6 brother...

A slide show portrayed Doss with his family, friends and performing with band members and musicians. Others captured a combination of serious and funny portraits.

"Bill was a beautiful soul who left the world in a better state than he found it," said Jason NeSmith, lead guitarist of Casper & the Cookies. "I love him like a brother."
When a stream of performers and others who were close to Doss spoke to the gathering, they emphasized laughter, family and music.

A tearful reading of The Beatles' "Strawberry Fields Forever" started the line of conversations and acoustic performances.

Watch a 12 minute clip from the Georgia event, below...

"...Jeff Mangum was speaking. I remember he phrased the death as "when Bill decided to check out," & I wondered about if there is ever any moment of agency in these matters even though people usually talk about dying as being taken unexpectedly. I thought about giving up versus giving UP. Jeff began to play "Love Athena" and eventually I started crying. I was thinking about Athens & feeling community & togetherness & deciding I might not want to move away any time after all. I was thinking about all the mistakes & confusion that initially brought me here and how it was beginning to make sense after so many years. I was trying to cry discretely into Colby's shoulder because I thought if I made eye contact with anyone else I might start totally weeping... when I looked up near the end of the song, a lot of people had joined Jeff onstage & were preparing to play, too.

They sang Sun Ra "Enlightenment" & had given out lyric sheets so everyone could sing. After a few rounds, they paraded off the stage and onto the floor & snaked among everyone in the "audience." It was like a jazz funeral; I thought for a moment they might even lead us all outside! But we stayed inside & continued repeating the words again & again and like Dena said I didn't want it to stop, it was sad & beautiful and I didn't want everyone to shuffle away as the lights came up. Scott ended up standing in front of us with his tuba & Julian was banging on some empty bottles at our table; whoever didn't have an instrument was clapping or stomping or hitting the beat on something. Everyone was singing & smiling & crying and it was just lovely...."[stacey-marie]