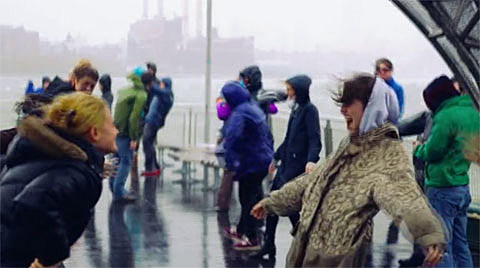 When I set out to film my neighborhood in Williamsburg, Brooklyn the night of the hurricane, I did not anticipate the footage I was about to film. My main goal was to make a short film of whatever I captured that night. A small art film was the idea. But after the explosion, things quickly changed for me. Two weeks later, I finally had time to edit this film together, and show a small perspective of the storm: "A One Block's Story."
This film is an emotional response of what it actually felt like to be out in hurricane Sandy, amidst all the immense energy, that eventually consumed parts of ours.

FRANKENSTORM: From Across The East River from John Mattiuzzi on Vimeo.

Film by John Mattiuzzi
MUSIC CREDITS:
"Our Lives, Our Destinies" by Mindthings --- From the album Life's Path
"The Great Giana Sisters (Piano cover)" performed by Christian Vestergaard --- From the album Seed64
"Dither: Part I" Performed by Auvox
"idm moon" by arhipco --- from the album sci-fi music
Select footage from this film will be featured in a few upcoming documentaries this week on the National Geographic Channel, PBS NOVA, and The Discovery Channel.
For info on how to help those affected by the storm:
Red Cross-- nyredcross.org