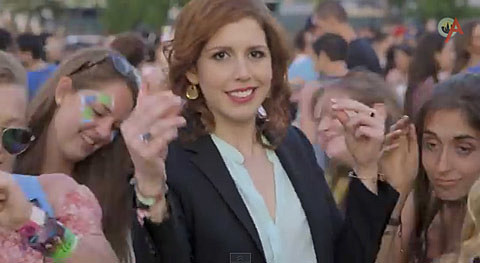 The dust has settled at Governors Ball where a whole bunch of artists performed over three days at Randall's Island. (Have you seen our pics?) Among those on the scene was media consultant Janessa Slater (a dead ringer for SNL's Vanessa Bayer) who interviews the likes of Interpol, Tanlines, Frank Turner, and others...as well as random Governors Ball attendees. It's vaguely Ali G and, though most bands seem in on the joke, she definitely gets in some good digs. Watch it over two parts below.

In related news, if you were at Governors Ball and lost anything (like maybe your keys or sunglasses), there's a Lost & Found posted to GovBall's Facebook that you can check.