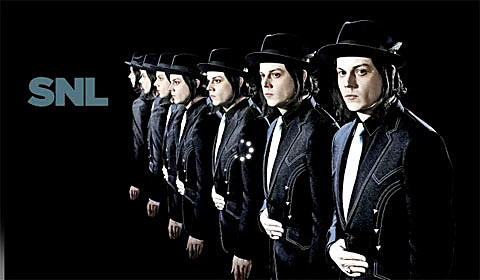 Jack White, no longer in the White Stripes, has a solo album on the way. Jack played two of the new songs live last night on Saturday Night Live, a show that recently featured performances by Sleigh Bells, Bon Iver, Justin Timberlake as Bon Iver, Lana Del Rey, and Kristen Wiig as Lana Del Rey. First he performed "Love Interruption" with an all girl band, and then "Sixteen Saltines" with all guys. Watch both SNL videos, intros by host Lindsay Lohan included, below. Bonus points if you can name some of his band members...