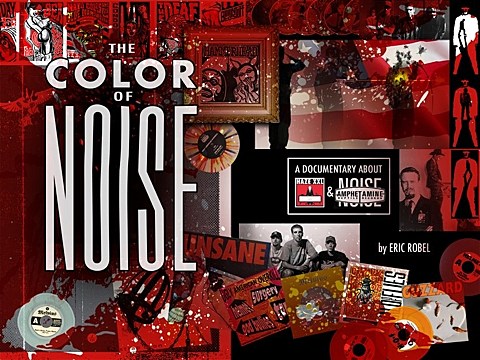 As you may know, there's a new documentary on legendary record label Amphetamine Reptile on the way called The Color of Noise. In conjunction with that, AmRep will reissue some of the highlights of their catalog on vinyl starting this December. Here are the details:

MVD Entertainment and the legendary Amphetamine Reptile Records has partnered with Robel Films to release the documentary The Color of Noise, a film that looks into the history of the label and its founder Tom "Haze" Hazelmyer. MVD and AmRep will also re-issue some of the best releases from the catalog on vinyl and CD starting in Dec 2015 and continuing into 2016 and beyond. The initial round of releases includes the first vinyl edition of the legendary Halo of Flies' Music for Insect Minds on double LP, the Cows' classic Cunning Stunts and a 3 LP set of the infamous Dope Guns 'n Fucking in the Streets compilations featuring Mudhoney, Helmet, Melvins, Tad, Tar, Superchunk and lots more. Also, the soundtrack to the The Color of Noise will be released on limited edition 150 gram color vinyl for Record Store Day (November 27th).

We've also got the premiere of a clip from the documentary featuring Dead Kennedys frontman Jello Biafra talking about Mudhoney. "People look back a Nirvana or Soundgarden as what kind of launched the whole grunge mania, but for us underground and the vinyl junkies it was one song, it was 'Touch Me I'm Sick' by Mudhoney." Watch the clip below.

Color Of Noise CLip from MVD on Vimeo.