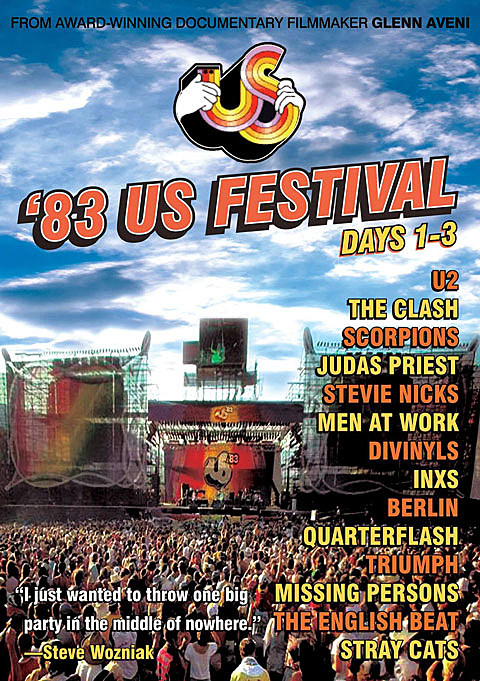 A bit of background first: unless you're well into your 40s, you probably don't remember the US Festivals. The US Fests were two huge music festivals thrown in 1982 and 1983 by Apple co-founder & kajillionaire Steve Wozniak, who pretty much paid for the whole thing out of pocket (including a whopping $1.5 million fee for Van Halen, on top of $1m for David Bowie). Though the festivals both drew massive crowds that numbered into the hundreds of thousands, Wozniak took a total bath on them and lost millions. The name is pronounced like "us" rather than like the abbreviation for United States; the name is an abbreviation for "Unite Us In Song," but don't ask me how.

Now, after 30 years, the second US Fest is seeing a concert-film treatment. The footage lineup for US Festival 1983: Days 1-3 is simultaneously timeless and hilariously '80s: U2, The Clash, Stevie Nicks, Scorpions, INXS, Men At Work, Stray Cats, Triumph, and Missing Persons all put in appearances. (Incidentally, this festival was Mick Jones's last performance with the Clash before his dismissal.) If you need evidence of the thorough '80s-ness of this event, look no further than the footage of Judas Priest playing "Breaking the Law" that we have streaming exclusively below. Exhibit A: the band members' outfits, which push the boundaries of sanity even by JP standards. Exhibit B: the fact that thousands and thousands of people are getting down to Judas Priest in the audience with nary a hint of irony or reserve. It's kind of beautiful.

US Festival 1983: Days 1-3 comes out on 12/3 via MVD and will be available to rent or download at iTunes. There are some other preview vids available online, too: U2 playing "Sunday Bloody Sunday" at Rolling Stone; Stray Cats playing "Rock This Town" at Purevolume; and the Clash playing "Should I Stay or Should I Go" at Spin. Check out the JP video along with the full tracklisting below (and keep an eye out for another on Invisible Oranges tomorrow)...

Track Listing:
INXS - The One Thing
Divinyls - Boys in Town
English Beat - Jeanette
Stray Cats - Rock This Town
Stray Cats - Please Make Up Your Mind
Men At Work - It's A Mistake
Men At Work - Who Can It Be Now
The Clash - Should I Stay or Should I Go
Judas Priest - Breaking The Law
Judas Priest - You've Got Another Thing Comin'
Triumph - Magic Power
Triumph - Fight The Good Fight
Triumph - Lay It On The Line
Triumph - A World Of Fantasy
Scorpions - The Zoo
Scorpions - Can't Get Enough
Berlin - Sex
Quarterflash - Find Another Fool
U2 - Sunday Bloody Sunday
U2 - The Electric Co.
Missing Persons - Words
Stevie Nicks - Stand Back
Stevie Nicks - Outside The Rain
--