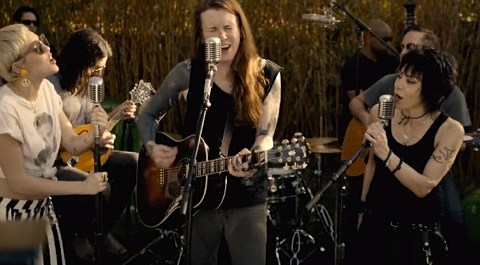 Miley Cyrus recently launched the Happy Hippie Foundation, a nonprofit organization with the goal of "rallying young people to fight injustice facing homeless youth, LGBT youth and other vulnerable populations." In honor of its launch, Miley has been filming live videos in a backyard (called the Backyard Sessions), and the newest one is a pretty amazing collaboration with Against Me! singer Laura Jane Grace and Joan Jett, where the three of them cover The Replacements' "Androgynous." Watch the video below.

This collaboration (which follows the news that she and her friends The Flaming Lips are working on an album together) isn't the only interesting Miley news this week. In a new interview with Out she came out as gender queer:

Miley says she already spent a lot of time struggling with traditional gender expectations--and being resentful that she was a girl. "I didn't want to be a boy," she clarifies. "I kind of wanted to be nothing. I don't relate to what people would say defines a girl or a boy, and I think that's what I had to understand: Being a girl isn't what I hate, it's the box that I get put into."

Miley will also be honored, along with Andy Cohen, at the sixth annual Inspiration Gala to benefit amfAR, "in recognition of their contributions to the fight against AIDS." The gala happens June 16 at Spring Studios in NYC.

In other news, Against Me! are touring soon, including a free NYC show, and Laura is playing a solo show here too.

Joan Jett is currently on tour with The Who (check out pics and setlists of the recent Austin show), and that tour hits the NYC-area five times this year.

The Replacements are also on tour. They don't hit NYC but they have a Philly show this weekend with Superchunk. We recently posted pictures and setlist of their Chicago show with The Smoking Popes, as well as a live video of their new song.

More #backyardsessions videos coming today!! Huge thank you to Laura Jane Grace of Against Me! and #JoanJett of Joan Jett and the Blackhearts for lending their voices and helping me launch The Happy Hippie Foundation. Find out more at happyhippies.org #HappyHippiePresents #Androgynous #HappyHippie