The Individuals (circa early-'80) who play Maxwell's final night 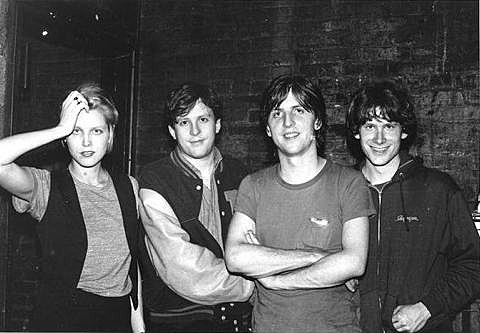 As we've mentioned more than a couple times, we are really in the final days of venerated Hoboken rock club, Maxwell's, which closes its doors for good after 35 years on Wednesday (7/31). The run-up to their farewell has been a great string of shows, most recently with Mission of Burma on Sunday (7/28, pictures soon) and Real Estate last night (7/29). Tonight's show (7/30) is headlined by Lee Renaldo & the Dust whose line-up features his onetime Sonic Youth bandmate (and Maxwell's co-owner) Steve Shelley on drums. There are also sets from Single Dynamite (we're told it's one of Ryan Sawyer's many projects) and Houndmouth as well. Sold out.

Tomorrow is the last day in business and the club is throwing a free block party starting at 4 PM. Later that night, the inside of the venue will host performances from three bands from Maxwell's early days who've reformed just for the sendoff: The Bongos, The Individuals, and the first band ever to play Maxwell's, "a" (which, coincidentally, shares members with The Bongos and The Individuals). That show is free.

The New Jersey Star-Ledger has put together a nice mini-documentary on Maxwell's, featuring interviews with owners Todd Abramson and Steve Fallon, members of The Feelies, The Bongos, Titus Andronicus, Screaming Females, and more. You can watch that below.