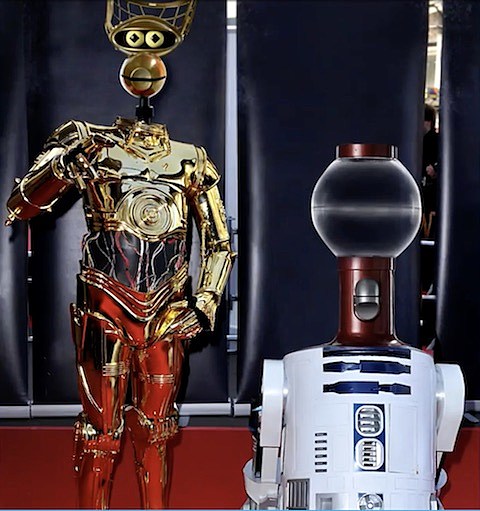 We are one week from Star Wars: The Force Awakens. As you know. Everyone knows. Despite director J.J. Abrams managing to keep most of the plot details a secret (pretty amazing in this day and age), that hasn't stopped anyone from covering it constantly. A Notorious B.I.G. mashup with John Williams' score? Yep. "Top 16 Lightsabers, Ranked," anyone? Not even Wilco could resist. BrooklynVegan is not immune to the hype, either, and is excited like almost everybody else. So here are some things.

Tom Servo and Crow T. Robot of the soon-to-reboot Mystery Science Theatre 3000, screen-tested for The Force Awakens and that footage has now emerged over at Funny Or Die. My favorite bit is when Crow tries to get them to read his long-unproduced screenplay 'Earth Vs. Soup.' Watch it below.

Before you see Star Wars: The Force Awakens, find out if BB8 makes it home for Droid Day in the only holiday special based solely on rumor and conjecture about the upcoming film.

Like the original, it features long stretches of un-subtitled alien conversations, awkward laugh tracks, celebrity cameos (Jason Alexander, DJ Qualls), and a musical number (in this case, feel-good rockers Train). You can watch that below, too.

And if you don't care about being spoiled, a new Chinese trailer of Star Wars: The Force Awakens appeared on YouTube recently with a whole lot of new footage, and some stuff that could probably be considered "plot." Watch that at your peril, below...

Leaked 'Star Wars' Auditions With The Bots From MST3K