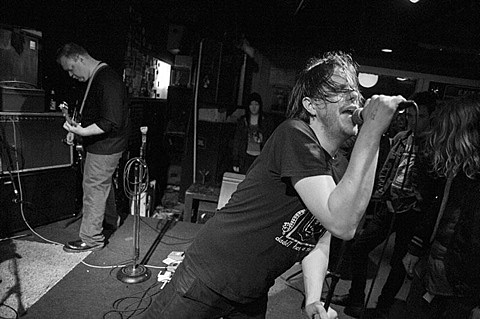 ...like Ty Segall and Thee Oh Sees, this is dirty garage rock but with just the right amount of clarity. MUSK make dark, devilish sounding stuff pulling from blues, psychedelia and hellish punk. If you can picture The Stooges' Fun House but swampier and on even more drugs, you might get an idea.

I wrote the above last year about the self-titled debut LP from scuzzy Oakland garage rockers MUSK, which is a great album and one worth hearing if you haven't already. (Order yours.) One of its tracks, "Combat Shock 2," has now been given the video treatment (dir. David Bessenhoffer) and we've got the premiere of that in this post. The track and video are based on the 1986 Troma-released film, Combat Shock, which has been called "one of the ugliest, nastiest, most depressing movies of the decade."