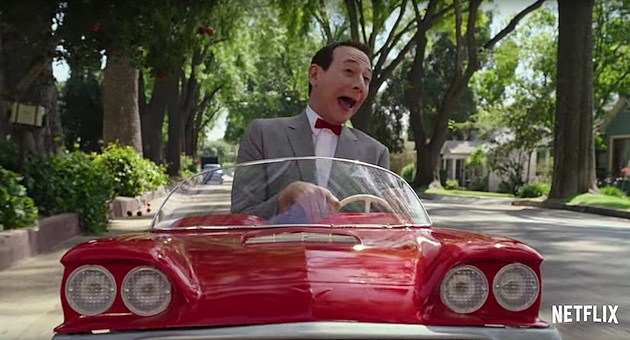 After sharing a teaser a few weeks ago, Pee-wee Herman has unleashed the full trailer for his upcoming Netflix movie Pee-wee's Big Holiday. Content with his smalltown life in Fairville, a chance run-in with a mysterious stranger (True Blood's Joe Manganiello) has Pee-wee deciding to venture out and see the world. It looks very much in the Big Adventure mode, but also looks like it'll be fun. (He reworks a balloon gag from Pee-wee's Playhouse that is still one of the weirdest things I've ever seen on a kid's show.) Watch the trailer below.

As mentioned, Pee-wee's Big Holiday officially premieres at SXSW and will be on Netflix March 18. The film's co-writer, Paul Rust (Arrested Development, Comedy Bang! Bang!) will star in his own Netflix series, Love, which premieres this Friday (2/19).