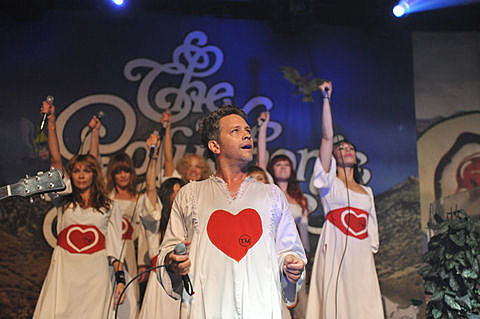 The Polyphonic Spree released their new Christmas album, Holidaydream: Sounds of the Holidays Volume One on October 23. Of the ten standards it features, the collective just made a video for "Winter Wonderland," and you can watch that for the first time at the bottom of this post.

"When I first heard Winter Wonderland I was really moved by the way it had a beautiful haunting beginning. I remember thinking, " What happens when Santa has had too much of the elves, the up keep of the North Pole's day to day, and turns in the cookies and milk for a glass of scotch." Lucky for me my friend Jack enjoys scotch, has Santa's snowy locks and can be easily found on the patio of the City Tavern in downtown Dallas. Jack was also the original voice of Popeye's Chicken commercials, so when I asked him to recite 'Twas the night before Christmas' intro, he didn't hesitate. Spontaneity took over for the rest of the video. I dressed my youngest as the elves, my beautiful and talented wife Jessica Jordan (who is a member of the Spree) assumed the part of the queen elf and partner in crime ( we broke into an old abandoned church for her scenes), and Tim allowed me to get up close and personal for the mouth shots. In the end, Santa just may have had one too many scotch's and will be back to the milk and cookies just in time for Christmas this year."

As mentioned, the band are celebrating the album with their Holiday Extravaganza! Tour which brings them to NYC on December 15 at Webster Hall. Tickets for that show are still available.

The "Winter Wonderland" video and the album's trailer video, below...