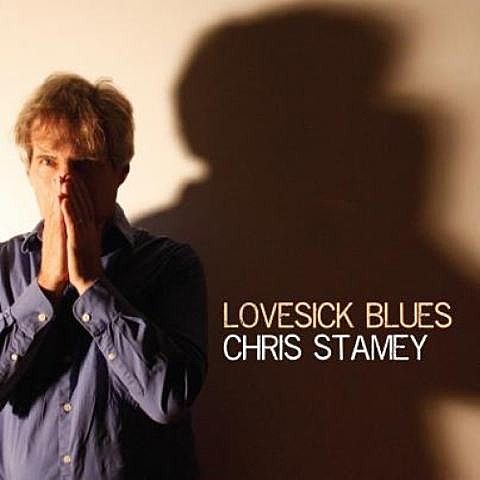 As one half of the songwriting core of The dB's, Chris Stamey has been the off-kilter ying to Peter Holsapple's twangier yang. Following The dB's 2012 comeback LP, Falling Off the Sky, Chris Stamey will release Lovesick Blues on February 5. (That's the cover art above.) His first new solo record in eight years, the album is lush orch-pop that features Stamey's old pal (and occasional live dB's member) Mitch Easter and creative input from XTC's Andy Partridge.

Says Stamey of the album, "This record is the closest I've ever gotten to the sound I hear in my head in the middle of the night. It's always the quiet ones that sound the loudest in the dark." You can here some of it right now as we've got the premiere of the video for Lovesick Blues' title track and you can watch it below, along with a lyric video for "Skin"

Chris has a couple live dates coming up in February including one in NYC at Joe's Pub on 2/16 with backing by a five-piece chamber pop ensemble (including cellist Jane Scarpantoni). Tickets are now on sale. Chris will also be at SXSW this year. All upcoming dates are listed below

Video edited by Jesse Paddock, with footage by Chris Stamey, for IGAG 4C* Productions. Archival images, including Harry Partch conducting at Mills College, courtesy of the Prellinger archives. Footage of the NC orchestral musicians (shot during the Sister Lovers concert at Mason Hall, NYC) courtesy of Drew Denicola and Associates.

Music produced by Jeff Crawford. Arranged and remixed for the video by CS.

* I Got a Greenscreen for Christmas Productions