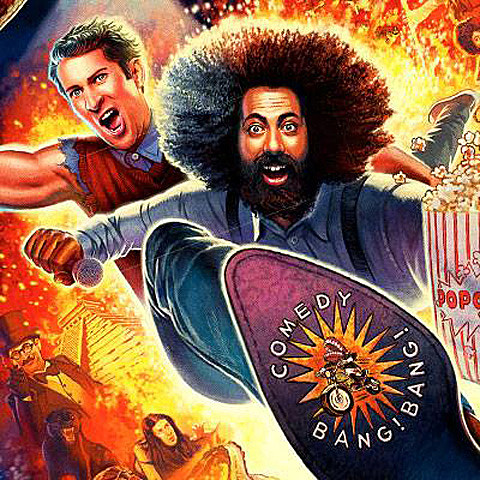 IFC's Comedy Bang! Bang! is currently in the middle of its new season and there have already been a few notable music guests on the show. The National made an appearance on the fall season premiere as part of a fake makeover show "Retool the School" and Flaming Lips frontman Wayne Coyne appeared on the Halloween episode (dressed as Carrie), and then made some impromptu music with bandleader Reggie Watts as a web exclusive. Watch clips from all three of those below.

Reggie Watts has a couple NYC shows coming up. On Friday (11/7), he'll be at The Bell House as part of a NY Comedy Fest show that also features Jim Gaffigan, James Adomian, Cameron Esposito, and Eliot Glazer. It's a benefit called Uncivil Union and proceeds go to The Ally Coalition and New Alternatives which look to "raise awareness and funds to end discrimination against LGBTQ people." Tickets are on sale.

Later Friday night Reggie will also perform at The Blue Note for a 12:30 AM set. Reservations are available.