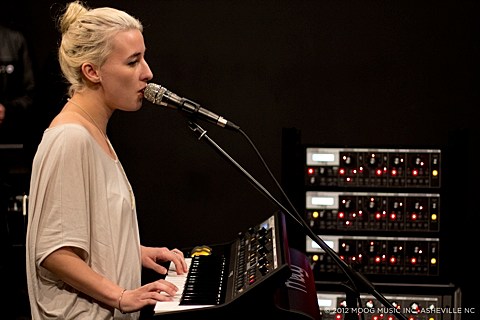 The Moog Sound Lab is a video series where bands and artists are invited to perform in the Moog Music factory in Asheville, North Carolina. With an arsenal of Moog equipment at their disposal, the musicians offer radically new takes on their material.

The first in the 2013 series which has been premiering here at BrooklynVegan, was Toro y Moi, followed by Washed Out, and now here's Zola Jesus, who does a rendition of "In Your Nature," which initially appeared on her 2011 album, Conatus. The version played here is a pretty similar take to the album version, but it's especially fun to watch those polyrhythmic beats hammered away on three Voyager RMEs. Watch the video along with more details on her equipment and another picture from the session, below...

In its original incarnation "In Your Nature" existed as an epic operatic with dance floor sensibilities, but here Nika imbues the song with analog warmth that contrasts her cold, snowy upbringing. A Minitaur Analog Bass synthesizer controlled by a Minimoog Voyager replaces much of the stringed arrangement found in the original version of the song. The Little Phatty played by keyboardist Nick Turco does double duty, further expanding what would have been a bowed arrangement and providing the arpeggiation featured in the second half of the song. The live violin played by Christiana Key was routed through a MF-104 analog delay to thicken the sound and serves as the last trace of the rich strings that carry the original. Synthesist Alex De Groot provides the song's rhythm, expanding on the song's original percussive track with live drumming generated by three Voyager RMEs and controlled with a MIDI drum pad. - Moog 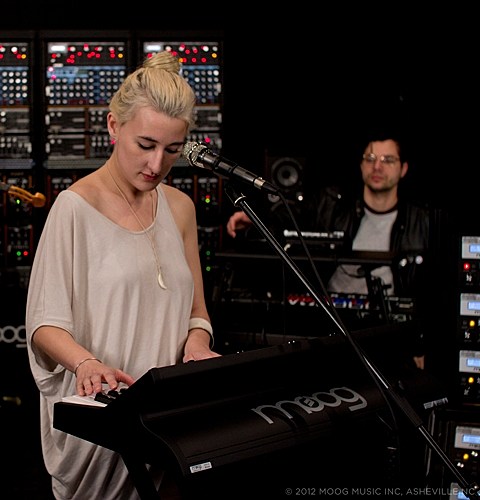 P.S. congrats to Robert Moog (may he rest in peace) on his entry into the Inventors Hall of Fame!