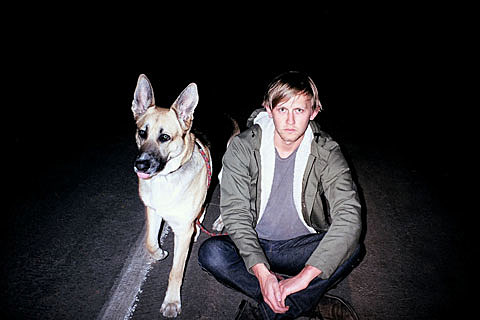 Van Pierszalowski, former lead singer of the recently broken-up Port O'Brien, now records under the moniker WATERS. Rather than the indie folk/pop Port O'Brien had become known for, in WATERS Van opts for a fuzzy '90s-lo-fi approach which can be heard above in the song "For the One." WATERS releases his debut LP Out In The Light on September 20 via TBD Records.

He's currently finishing up a tour in Europe with Wye Oak which he'll follow with three NYC dates. WATERS plays the Flavorpill/IROCKIROLL/The Bell House Northside showcase at Cameo Gallery on June 18 with Sean Bones, Neighbors, Zuzuka Poderosa, Young Adults, and Wojick. They also open for Deervana (aka Deer Tick as Nirvana) at their sold out Northside show at Brooklyn Bowl on June 19. WATERS then plays a headlining show at Mercury Lounge on June 21 with Exitmusic, Milagres, and Anni Rossi. Tickets are on sale.

The Cameo show is one of many that Sean Bones has happening at Cameo this month. He already played there last Thursday and he also plays there on June 23rd (with afro-funk band/collective Superhuman Happiness) and June 30th with the great New Moods. Full residency show lineups are below. Sean is playing new songs at the shows. Those songs will appear on the new record he's finishing recording with Shane Stoneback (Sleigh Bells, Cults, Vampire Weekend). Sean's last record came out on Frenchkiss.

New Moods have also been added as the opener on the July 1st Memory Tapes show at Mercury Lounge. Tickets are still on sale.