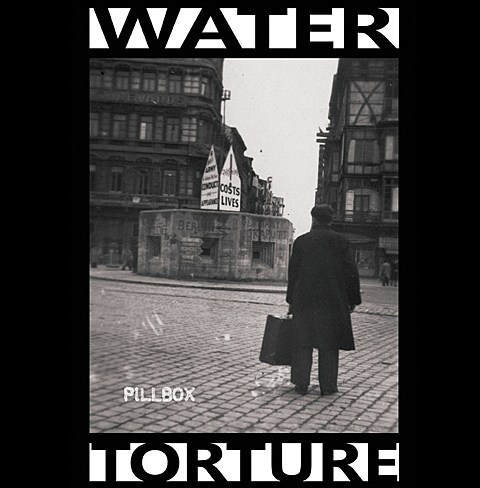 Rapid-fire blasts. Sustained, grinding crawls that shake the floor thanks to the two bass set-up. Wild gales of feedback and lashes of noise. That's Pillbox, the newest album from powerviolence destroyers Water Torture. The trio -- two bassists, one drummer -- are intent on bringing back the subsonic element favored by Man is the Bastard; the one few others have been able to pull off. But Water Torture are a little speedier, a little catchier, and a little more nimble than similar groups that have tried the dual bass rumble. And over Pillbox's 17 tracks, there's always a sense they have their hands on the wheel, even when they're circling the void. The sheer wattage of power they're able to impart is impressive, though Pillbox wouldn't hit as deeply if Water Torture weren't as exacting.

People have taken notice. Since coming up through Grindcore Karaoke in 2011 with their self-titled effort, Water Torture have steadily risen to prominence on the back of a billion splits. Now, they're set to play Maryland Deathfest 2015. They're currently touring Europe. They'll be hitting big US bills like Punch, Curmudgeon, and Crushed on September 9 at NYC's Death by Audio and Cloud Rat, Nervous Mothers, and Recreant on September 18 at NYC's The Acheron (tickets). With Pillbox, it's easy to hear why. Pillbox is the result of a hungry band showing off veteran skills while playing a style that, despite it's importance, rarely produced other contenders. Consider that distinction changed. Water Torture are definitely one.

All dates are listed, with a stream of Pillbox, below...