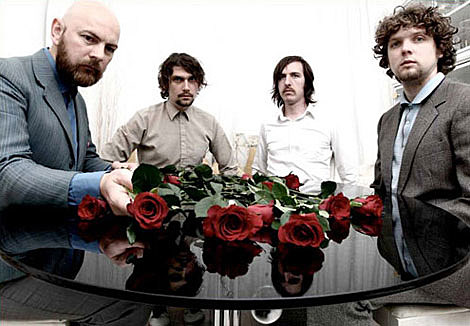 Is "wave" the new "wolf"? Probably not, but there are two UK bands with the word in their name playing New York next month, and both are playing before and after trips to Austin for SXSW so here's a post about them both.

Up first are Liverpool quartet Wave Machines who play Le Poisson Rouge Thursday, March 4 (tickets are on sale now) opening for Tiger City. Then, after SXSW, they play an early show at Mercury Lounge on Monday, March 22nd. Tickets go on sale today (2/18) at noon. Their debut album, Wave If You're Really There, ping-pongs between funky, falsettoed synthpop and more traditional guitar rock. For a good example of the former, probably the best song on the album, you can download an MP3 of their single "Keep the Lights On" at the top of this post. (A couple videos are at the bottom.) The band are also prone to wearing masks of their own faces when they play live, so be ready for that. Wave Machines will hit a lot of the Northeast and Midwest before heading to Austin, and all tour dates are at the bottom of this post.

Then there's The Wave Pictures who we've already mentioned are playing the Brooklyn Vegan pre-SXSW party Monday, March 15 with Casiokids, Let's Wrestle and one more band TBA (tickets). But they just added a second NYC show, after SXSW, at Mercury Lounge on Sunday, March 28th. Tickets are on sale now. With with their literate, heart-on-sleeve lyrics The Wave Pictures are recommended to fans of The Smiths, Jonathan Richman and Hefner. Speaking of, former Hefner singer directed the video to TWP's single "I Love YOu Like a Madman" which you can watch below. You can check out a couple Wave Pictures MP3s at the top of this post, there are more at the band's website, and a double-pack edition of their last two albums (both excellent) hits American shelves on April 27.

Tour Dates and videos are after the jump...

Wave Machines - The Greatest Escape We Ever Made

The Wave Pictures - I Love You Like a Madman