Slow Club in the crowd @ the Moshi Moshi showcase, SXSW 2009 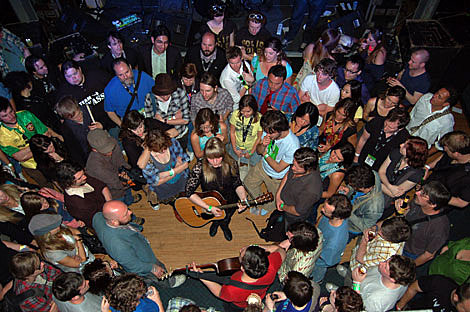 There is one unmissable show this week, in my opinion, and it's a free one: Friday's Seaport Music Series (8/7) with three excellent bands from the Moshi Moshi label: Casiokids, Slow Club and The Wave Pictures. This is part of a tour celebrating the UK label's 10th Anniversary that kicks off in full tonight in Toronto (8/5). Moshi Moshi, and their influential Singles Club, has launched the careers of Bloc Party, Hot Chip, Kate Nash, Lykke Li, Au Revoir Simone, Friendly Fires , Florence and the Machine and others.

I'm well documented as a big Casiokids fan and these Norwegians are a lot of fun live (like when they played a BrooklynVegan party at SXSW this year). There's a couple MP3s at the top of this post, including their brand-new single "Finn Bikkjen!" (Though "Fot I Hose" is the real jam, also above.) I've also written about Slow Club before who are one of the most charming bands I've seen this year. Their album might be a bit twee for some, but I dare anyone not to be won over by their live show. They were at SXSW too (picture from one of their shows above).

But I am super excited for The Wave Pictures who'll be making their U.S. live debut at the Seaport. Their album Instant Coffee Baby made my Top 20 Albums of 2008, to which I wrote:

Wave Pictures' frontman David Tattersall has the angst of Hefner's Darren Hayman, and the witty wordplay of the Morrissey ("My tongue is on the run and it's only just begun" may be this year's "Bigmouth Strikes again."), and band play it fast and loose like early Modern Lovers. Tattersall's vocals may be too idiosyncratic for some at first, but so were Moz and Hayman's probably, so keep listening, because they're excellent! And if you like this, there's about five more albums where that came from. (And if the Hefner comparisons intrigue, Tattersall and Hayman have a bluegrass band too. Don't wince, it's good too.)

The Wave Pictures have a new album out, If You Leave it Alone, which is nearly the equal of Instant Coffee Baby. The band have almost played here at least three times only to drop out, but I'm told they're really going to play this time. And it's not just NYC that's getting them: The Moshi Moshi Road Trip features all three bands, though some dates don't feature Wave Pictures and some don't have Casiokids, but any permutation of the three is still a good time. Check the tour dates below to see which bands will hopefully be near you on this tour. Weather looks to be nice, but the Seaport fest folks have said that if it does end up looking like rain... it will move indoors, locale TBD. But let's hope for sunny skies. 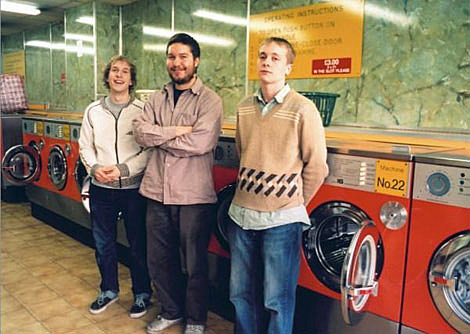 Joe Pernice plays Bowery Ballroom on Friday (8/7) as part of his book tour promoting his enjoyable debut novel, It Feels So Good When I Stop which I just finished reading. It's about a twentysomething slacker as he tries to figure his life out in mid-'90s Amhurst, Mass. There's not a lot of plot, it's more a snapshot of a time a lot of us have been through (or will soon), but he gets the details right and there's a lot of well-observed humor, as well as a lot more filthy talk than I was expecting. It also features a cameo (I know that's not the right term) from Lou Barlow (who has a new album coming out and tour dates announced). While it's not about a musician per se, music figures heavily into the characters lives and Joe has just released a companion album with covers of some of the songs written about in the book, including The Dream Syndicate's "Tell Me When It's Over" and Del Shannon's "I Go to Pieces," all done in that lush, breathy style Pernice is known for. There's also a Sub Pop single out this week credited to the fictional band Young Accuser who also figure into the story's proceedings. Confusing I know, but it'll make more sense once you read the book. Which I recommend you do. The Bowery Show will feature songs from the It Feels So Good album but I'd imagine he'd throw in some Pernice Brothers songs as well. Tickets are still on sale. 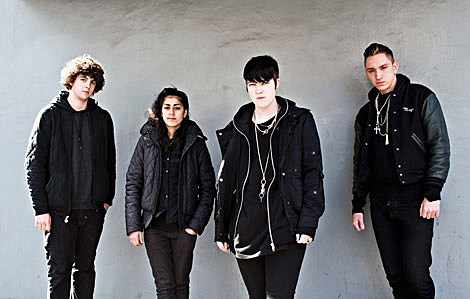 And finally, this Friday (8/7) is the first of UK band The XX's many upcoming NYC shows at Mercury Lounge with Philly's '80s-rockin' Free Energy. I've been listening to the XX's self-titled debut a lot lately, and I dig the minimalist approach they bring to their songs which reminds me a little of Young Marble Giants with a twangy Chris Isaak thing going on too. There's a lot of space in their songs and that breathing room is nice in today's climate of over-processed, over-compressed recordings. You can download their new single, "Basic Space" at the top of this post. Will they be any good live? One would think you wouldn't play six shows in a week without being able to make an impression with an audience but I guess we'll find out soon enough. Their show at Bruar Falls on Saturday is free, and they're also opening for School of Seven Bells at next week's final Seaport show of the season. And five shows in between. The August 13th show at MHOW is with Friendly Fires who they'll be back in the States in November and December for some more touring. A December 5th Friendly Fires show at Webster Hall was announced yesterday (though the opener wasn't listed), but then disappeared. Stay tuned to see if that comes back.

Tour dates for all the bands in this post and select video after the jump...

Slow Club - It Doesn't Have to Be Beautiful

Slow Club in the crowd @ the Moshi Moshi showcase, SXSW 2009 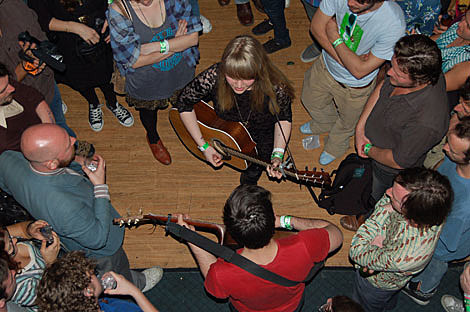