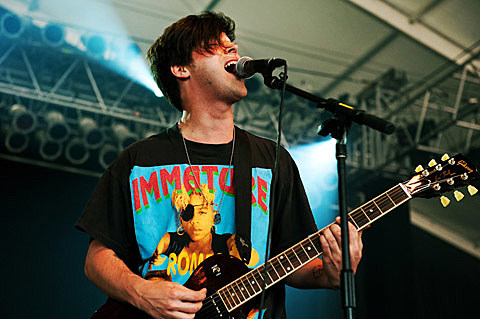 Earlier today, we mentioned that a bunch of punkish bands were added to Jay Z's Made In America festival, which goes down at Philly's Benjamin Franklin Parkway (8/31-9/1) this weekend. Since posting, one more band that fits that description has been added: Wavves. They play the Liberty Stage at 2:30 PM on Sunday. Full schedule here and tickets here.

Wavves will be in NYC when their tour with King Tuff and Jacuzzi Boys hits Irving Plaza on October 3. Tickets for that show are still available.

Meanwhile, Nathan Williams and Stephen Pope of Wavves were also revealed (in an interview with Rolling Stone) as two of the radio hosts on the upcoming Grand Theft Auto V game that Rockstar Games is putting out on September 17. You can watch the trailer for GTA5 that came out today that features a song by Chain Gang of 1974 (Remember them? They're still a band.) below.

The game also includes a station hosted by Flying Lotus which will play much of his own music, along with tracks from Tyler the Creator, Outkast, Aphex Twin, Machinedrum, DJ Rashad, Thundercat, Clams Casino, Dabrye, Kingdom and Shadow Child.

Updated Wavves dates are listed, along with a video, below...