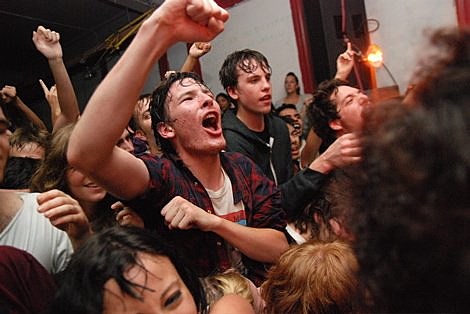 Well, Wavves did play Atlanta, but without incident, though the show wasn't scheduled for October 3rd (it was October 4th) and the venue had extra security... and no glass bottles.... and Black Lip Cole Alexander in attendance. The full story, with the show's enhanced security measures and a post-show review from Nathan himself, below...

Pheonix New Times: About the whole Black Lips fight, are you guys bringing extra security to Atlanta? Armed to the teeth Maybe some dogs with sunglasses?

Review of the show from Creative Loafing...

Despite Nathan Williams' insistence on the phone a couple of weeks back that drummer Zach Hill would not be playing with Wavves when they came through Atlanta, Hill was most definitely holding the sticks last night. The Hella drummer who once broke his hand beating his kit at Echo Lounge several years back still hits with helicopter speed and precision -- which makes an unexpectedly brilliant counterpoint to Williams' loose strumming and ooohhh wwwooo wwwooos.

No, there was no drama at the show, as all parties involved in the Black Lips scuffle from last weekend give off the appearance of having moved on; everyone aside from the meat heads in the audience who pissed and moaned about it after the show.

Precautions had been taken to prevent any sort of incident nonetheless. There was a cop stationed in the parking lot keeping watch over Wavves' van, and the bartender looked a bit sheepish while pouring bottles of beer into plastic cups saying, "Sorry, but I'm not allowed to serve out any glass bottles tonight because they're afraid somebody might throw one at one of the bands ..."

Wavves took the stage [and] prior to their presence onstage, attendance at the show was painfully sparse. The free Hunx and His Punx show across town at Vacation had obviously taken a bite out of the crowd, at least for the first part of the night. But now space was filling up. There was a discernible line in the room between the curmudgeons standing along the walls with their arms folded, talking about how much Wavves sucks vs. the mob of people crowded around the front of the stage dancing. Even a small mosh pit broke out toward the end of the set, resulting in a couple of near chick fights, but the crowd kept it in check.

One bearded fella even stormed the stage to do a jig with the band, but all it took was one evil eye from the police officer on duty and the rowdy dancer did a bunny hop back into the anonymity of the pit.

When Hill and Williams weren't beating the hell out of their instruments, squelching feedback pierced the air, drilling permanent damage into everyone's eardrums.

Live, the simple pop melodies of songs such as "California Goth," "No Hope Kids" and "So Bored" flourished free of the abrasive qualities of his recordings, but the sharp edges were still rounded off in a haze of ramshackle strum and the natural distortions of a live electric guitar.

Through it all, Hill swung like a monster on the drums and Williams was totally animated. But there was a lackluster feeling coming from the stage, as though they were waiting for something to happen as they nervously eyed the room. But nothing ever did, and just when the crowd was getting rowdy, the group bid farewell.

Following the set, an extremely half-assed demand for an encore brought the duo back to pound out one more song.

Cole Alexander was the only Black Lip in attendance, and after the show he wandered backstage where a peace accord was struck.

"Cole was led backstage by Zach Hill after the show," recalls the show's promoter Randy Castello of Tight Bros. Network. "He came back to talk to Nate and they hugged it out while talking about how stupid the whole thing was. I remember Nate saying that what Jared said to him in New York was really mean, but he's not mad at him, and he wants the whole thing to be over."

Hopefully the battle with Wavves is all water under the bridge now.

October 5th in Birmingham Alabama we are playing at the Bottle Tree. 10/8 we are playing in New Orleans at the Howling Wolf. Atlanta was awesome!! Athens was awesome! This tour has been so much fun I can't take it! Thanks to everyone that's come out.