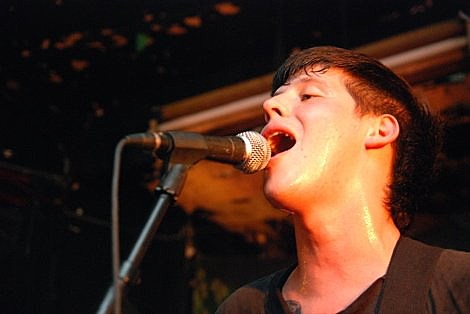 WAVVES' last trip to NYC included a show at Santos and Market Hotel and a scuffle with a member of Black Lips.

The previous (pre-Zach) drummer of WAVVES, Ryan Ulsh, has a hand in running Norfolk, VA's SHDWPLAY Records Showcase. The label brings its bands The Super Vacations (a garage rock outfit featuring Ryan), Sore Eros, PC Worship and Florida to Glasslands on Friday January 29th for a show presented by Other Music (who is giving away tix and vinyl, details below). The Super Vacations, PC Worship and Teeth Mountain play Market Hotel the next night. And the SHDWPLAY showcase is in Philly the next.

If you were at SXSW last year, WAVVES (and an anti-WAVVES shirt) were everywhere. They'll be at the Austin fest again this year too. A video of Nathan at SXSW 2009, "covering" "Barbie Girl" and more are below...

Norfolk, VA's premier dealers of psychotropic bedroom pop and experimental sounds, Shdwply Records are throwing a showcase a week from this Friday (January 29) at Glasslands, featuring the Super Vacations, Sore Eros, PC Worship and Florida. You've probably already guessed that we're giving away a pair of tickets, but Shdwply are also sweetening the deal by throwing in some vinyl to the winner, including Gary War's numbered and now out-of-print New Raytheonport LP, Super Vacations' "Henry" 7-inch, and PC Worship's NYC Stone Age LP (recorded live at Brooklyn's Market Hotel and The Wallet). Email rsvpshdwply@gmail.com to enter for tickets, and please leave your daytime phone number and mailing address.