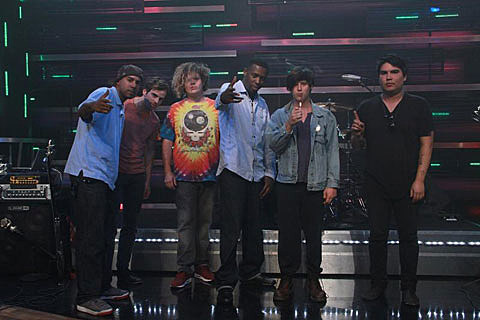 "MTV has just announced that fuzz-rock band Wavves will serve as the guest composer for the first season of the network's new scripted comedy series, "I Just Want My Pants Back." In addition, music legend Nic Harcourt will serve as music supervisor for the series. The pilot episode, which is airing as a sneak peek following the "2011 MTV Video Music Awards," on August 28, at 11 p.m. ET/PT, will feature the exclusive world premiere of their new song "I Wanna Meet Dave Grohl." The series will officially debut on MTV in January 2012. .

Wavves' new EP, "Life Sux" will be released by Wavves' label Ghost Ramp on Tuesday, September 20th and features "I Wanna Meet Dave Grohl," as well as collaborations with Best Coast and members of the band F*cked Up.

As guest composer throughout the MTV series, Wavves will have 20 original compositions as well as songs from their unreleased EP. Following the sneak peek on Sunday night, viewers can visit www.soundtrack.mtv.com for a free download of "I Wanna Meet Dave Grohl" and a list of all Wavves songs featured in the show.

From acclaimed director and executive producer Doug Liman ("Mr. and Mrs. Smith, "Swingers," "Go," "Bourne Identity") and based upon David J. Rosen's critically acclaimed novel of the same name, "I Just Want My Pants Back" follows a group of friends as they navigate the minefield of their post-collegiate years. The series will feature 12 half-hour episodes.

Struggling with sex, love, career and friendship as a young twenty-something living in Brooklyn, the series follows Jason Strider, played by Peter Vack. Jason puts hanging with his friends, going to bars and hooking up above his entry level job where he's the lowest rung at a casting agency, and dreams of being in music journalism...but has no idea how to get there. It's not until a one night stand steals his heart and his pants, that he begins a quest to get his beloved jeans back, and hopefully the girl, while also growing up along the way.

The series also stars Kim Shaw as Jason's best friend 'Tina;' Jordan Carlos as 'Eric' and Elisabeth Hower as 'Stacey,' college sweethearts making it go of it as couple as they forge into their adult years; Sunkrish Bala as 'Bobby' the owner of the local bodega and will guest star Chris Parnell as 'J.B.,' Jason's no-nonsense boss at the casting agency.

"I Just Want My Pants Back" is based on the book by David J. Rosen. The series a co-production with Universal Cable Productions. The pilot was written by Rosen and directed by Doug Liman. Justin Levy, Clay Spencer and Polly Auritt are the executives in charge of production for MTV. Executive producers include Liman, David Bartis and Rosen. Gene Klein is co-executive producer.

Also, be sure to catch Wavves backing up GZA, the legendary founding member of the Wu-Tang Clan, on Fuel TV's "The Daily Habit" tonight at 8pm PST / 11pm EST. They will be performing GZA's classic tune "Liquid Swords"."
[press release]

Despite the nasty weather, as of 4:000pm, the Dee Dee/Wavves show in Manhattan's East River Park tonight (8/25) is still on. Dee Dee goes on at 7. The show is rain or shine.

Feel like staying dry? You can head to Long Island on September 9th instead, or wait until Wavves returns to NYC as part of a tour with Fucked Up that has the two bands at Webster Hall on Saturday, September 24th. More dates TBA soon. All dates and new EP tracklist and cover art below...