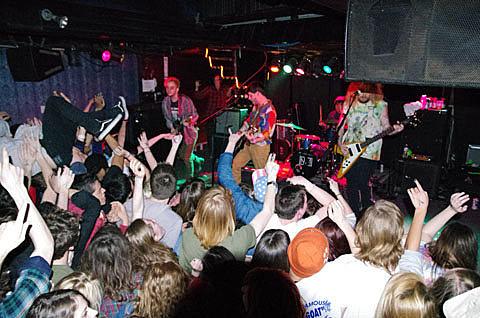 Wavves, who were last in NYC in April as part of a small club tour, will be playing bigger places this fall when the band hits the road with King Tuff and Jacuzzi Boys. That's a pretty appealing trifecta of party garage pop. The tour will hit NYC on October 3 at Irving Plaza. Tickets to that show go on sale Friday (7/26) at 10 AM, with a Citi Cardmember presale beginning Wednesday (7/24) at 10 AM, and Livenation and Music Geeks presales starting Thursday (7/25) at 10 AM. (Music Geeks password is "musicgeeks"). All tour dates are listed, along with a "skydiving tour announcement" video, below.

Jacuzzi Boys' (who were also just here, touring with Man, Or Astro Man?) new self-titled LP will be out September 10 via Hardly Art. Watch the video for single "Double Vision" and stream another track from the album, below.