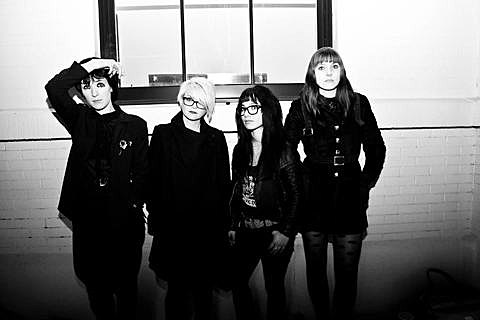 Wax Idols new album, Discipline + Desire, is out this week via Slumberland and, as mentioned, marks a decided left turn from the garage pop of their first album to the darker sounds of early-'80s gothy postpunk. Which they do very well and there are some grabby hooks amongst the jagged guitars, driving rhythm section and Hether Fortune's impassioned wails. (The Chameleons' Mark Burgess helped a little on the production end, adding bass -- and cred -- as well.) You can stream three tracks from the LP below and the whole thing can be heard over at Pitchfork.

Wax Idols have expanded their tour with TV Ghost a bit, adding a second NYC show, playing Cake Shop on May 3 that also has Australia's Laurels on the bill. That's one day before their show at Shea Stadium (5/4). All tour dates are listed below.