Waxahatchee at Saint Vitus in 2012 (more by Fred Pessaro // BBG) 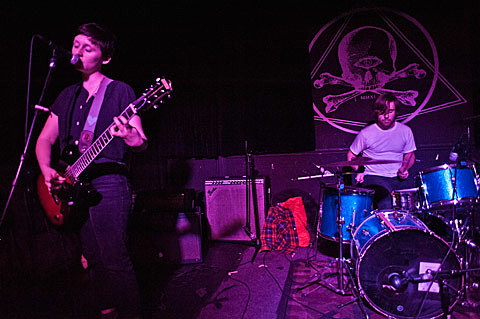 Waxahatchee (the project of Katie Crutchfield, formerly of P.S. Eliot) released her new album, Cerulean Salt, last week (3/5) via Don Giovanni. It follows her personal, lo-fi, mostly acoustic debut, American Weekend, and though this one's got cleaner production and some other musicians on it (including members of her sister's band, Swearin'), it's just as deep and honest as her debut. The album pulls elements of slowcore, early Death Cab/Rilo Kiley-era emo, and punkish indie pop into a mix that's truly her own. And really what's most impressive about it is the lyrics. Katie's not singing about anyone's experiences besides her own, but they're so unfiltered and close to her core that it's difficult not to hear your own experiences in her words. You can listen to a Spotify stream of the entire album below.

Waxahatchee just did a few NYC shows last month like the Don Giovanni Brooklyn showcase and Indie Pop Prom, and now she's headed to Austin for SXSW, but you'll get another chance to see her in NYC when she plays 285 Kent on April 3. Tickets for that show are on sale now.