Waxahatchee at Bowery Ballroom in September (more by Amanda Hatfield) 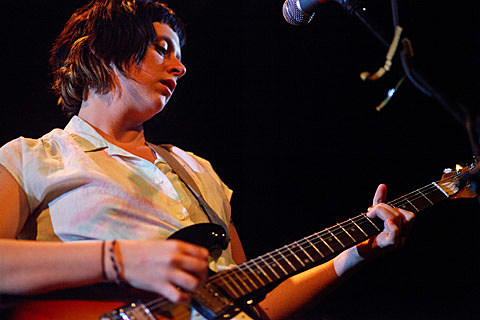 Waxahatchee (the project of Katie Crutchfield) has had a great year, getting a boost in success thanks to the recognition for her great Cerulean Salt, and doing a ton touring which included many NYC shows, most recently with Don Giovanni labelmates Screaming Females. She's currently on tour with her sister Allison's band Swearin' in Europe, and then on the west coast, and Waxahatchee's just announced some two NYC shows set to happen on January 21 at Mercury Lounge and January 23 at Glasslands with All Dogs and Cayetana. Tickets for Glasslands go on sale Wednesday (10/30) at 10 AM and Tickets for Merc go on sale Friday (11/1) at noon. All dates are listed below.

UPDATE: It's a full tour for Waxahatchee, All Dogs, and Cayetana. All dates are listed below.

Meanwhile, as discussed, Swearin' are about to release their sophomore album, Surfing Strange, next week (11/5) via Salinas Records. Their debut was an excellent album of lo-fi pop punk, and this new one's got bigger production, leans more towards traditional indie rock, and features some of the band's best songwriting to date. You can stream the whole album at NPR.

Ohio's All Dogs, who open Waxahatchee's NYC shows (and share a member with Saintseneca), last shared a bill with Katie (and Allison) at the Salinas Records 10th anniversary where Katie and Allison's old band P.S. Eliot reunited for one night. If you haven't yet, listen to their side of their split tape with Slouch below.

Don Giovanni also just released Cruel Optimist, the debut LP from Worriers (the new project of Lauren from The Measure [sa]). Stream that in full below.

All Waxahatchee dates are listed, along with Swearin's video for "Dust in the Gold Sack" from their new LP, a Waxahatchee video, and all other streams, below...