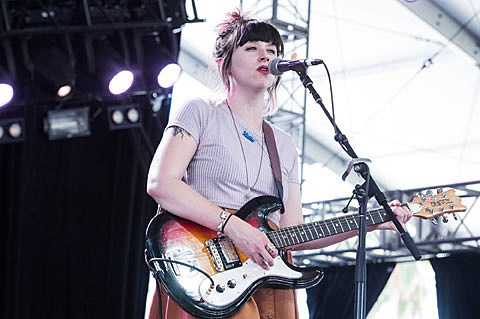 It's been a while since Waxahatchee have played NYC and even longer since they've headlined a show here, but that will finally change this fall. A full tour hasn't been announced at the moment, but a few dates have popped up including a NYC show in-the-round at Le Poisson Rouge on November 10. Tickets for that show go on sale Wednesday (8/20) at 10 AM.

UPDATE: It's a full tour and will be Katie Crutchfield touring solo to preview songs from her upcoming followup to Cerulean Salt. All dates are listed below. She also gave this statement on the shows:

I'm really looking forward to my upcoming tour this fall. I'm planning on playing songs from both my albums as well as songs from a new album i just finished recording. I'll also be playing solo, which i'm really excited about. We chose most of the venues specifically because they're more conducive to a more intimate type of performance. When i first started playing these songs i only toured solo and it's always so gratifying for me to perform that way again

Watch the video for "Misery Over Dispute" from last year's excellent Don Giovanni-released Cerulean Salt, with the list of currently known dates, below...